I wanted a upgrade for my Royal Enfield Himalayan

All right folks, it’s time!!!!
For the PowerTRONIC review.

Like many of you. After I picked up my Himalayan (From Speed City Cycle in Indianapolis, IN) I absolutely loved it. However during the break in period I realized this extraordinary machine was neutered by emission regulations. Especially having to meet California’s overly stringent emissions. Right out of the gate Royal Enfield has a huge stumbling block. It’s old age design of 2 valve, air cooled, long stroke engine doesn’t make for a good emissions platform. So unfortunately RE had to send us a machine with a 3rd of it’s power muffled.

Now I have a few Indian friends who I had met during the 1st Gulf War while they served with the French Foreign Legion who were Shoring up the left flank of the U.S. Armys XVIII Airborne Corps. Myself being a member of the 37th Engineering Battalion Combat Airborne. For several years I had traveled to Goa, India to visit and ride RE Bullet 500s and 350s.

Well I had contacted two of them recently regarding the Himalayan. Which one of them owned. But both of them had ridden. My other dear friend is a die hard Bullet 500 owner. Only willing to hang up those keys when the new RE Interceptor 650 twin is released. I was informed that the 2016 and 17 Himalayans were carbureted. And once all the bugs had been ironed out. It had excellent power and performance. Nothing as spindly as the US fuel injected models. So like any respectable motorhead. I went in search of a solution to the issue. Here in the US as I called around. I got “A Royal EnWHAT?” Obviously this wasn’t a good sign. So having lived in Indiana (the irony) I contacted an old friend who works at Vance&Hines. And asked if they were considering developing a fuelpak. Nope! Not interested. Said the Himalayan will be gone as fast as it came. They didn’t believe there was a market for such a machine. By the way. I had to purchase mine 2,008 miles away from my Arizona home. Because the dealers out west sold out of there stock. And are taking orders for the next 3 shipping cycles I read told. Then I hear through the grapevine that Power Commander was working on a fueling product for the Himalayan. Price range between $350. And $450. So I waited. Then my phone rang out of the blue in the middle of the night. And there was yet an other fear old friend from India who received my number from the other two. And just as luck would have it. He rides a KTM 390 with a PowerTRONIC fuel management system. And informed me that they may have a unit for the Himalayan. So I sent an information request to Race Dynamics the parent company. (BOOM!!) Within a few hours a wonderful young lady by the name of Eliska contacted me. She being in sales at their US based distributor (PowerTRONIC USA in Garland, TX). I immediately ordered the PowerTRONIC that evening for just around $300 with shipping.

The PowerTRONIC arrived and I immediately took issue with the fact that it had the installation instructions for a RE Bullet 500 Continental GT. Only to later find that the Bullet 500 and Himalayan 411 have near identical wiring harnesses. However it did nothing for me in regards to installation. It’s a good damn thing that I’m mechanically inclined. And was able to locate a few tools after launching them across the garage out of frustration.

First off you need to remove the seats, fuel tank and left side panel. Also take out the upper rear fender bolts so you can slip the PowerTRONIC wiring harness coupler under the rear frame support bracket. The PowerTRONIC piggyback unit will sit nicely in the detent on the rear fender. However you will have to remove your tool kit and carry it some other way. I just placed it in my left pannier. The rest is fairly easy. Sliding the PWTC harness along the left side of the frame and plugging the couplers into the OEM couplers. One I had all the PWTC couplers in place. I then reinstalled the fuel tank, side panel and rear fender bolts.

Then go to Race Dynamics web site and download your licensed copy of R-tune software. Plug in your PWTC to you PC with the supplied cord. And follow the instructions. What’s phenomenal about this product, is you can alter and customize MAPs to your specific me. However I recommend you leave that to the experts at Race Dynamics. And that’s where things change sharply from Race Dynamics and many other companies. You see when you have an issue or problem. The folks a Race Dynamics comes to your aid “Johnny on the spot”. Whenever I fired off an email. (BOOM!) There was and answer in a follow up email with in hours. Not days. And they will call you. Give you answers, talk you through installation. Explain MAPs and how things work. And ask you for your thoughts and recommendations. Tell me where you find this level of customer service these days? I had a Power Commander issue on a Harley years ago. The dealer told me they just sell the product. And I need to contact the manufacturer. So hit the bricks! Is what I got. After calling a half dozen numbers I finally got PC customer service. In the end all they told me was I need to take it to a professional for installation. So I ripped the PC from my Roadking and throw it across the road (do you see a repeating theme here?) Just a touch of anger management issues.

So as my luck would have it. Fushizle!!! Something wasn’t right with my new PowerTRONIC. The Himalayan wouldn’t idle. She would just keep stalling out. The check engine light wouldn’t go off. I took the bike for a ride. Just terrible. So I contacted Eliska and told her how upset I was. The next day another wonderful lady contacted me from Race Dynamics in India. She walked me through calibration steps and configuring. At which time she deduced that there was some technical issues with my PWTC. So they immediately sent out a entire new PWTC kit via FedEx expedited from India. (WOW that’s customer service!) Meanwhile I removed everything. Putting my Himalayan back to OEM. Several days later the new PWTC unit arrived and I went right to work installing it. While doing so. The folks at Race Dynamics must have received confirmation that the unit was delivered. That afternoon a gentleman by the name Karthik called and asked me how the re-installation was going? He talked me through a few MAP ideas and within minutes the bike was up and running. The PWTC comes with two MAPs. MAP1 the milder of the two. And MAP2 much, much peppier. (I mean totally different bike feel peppier) you can switch between the two by plugging in a coupler for MAP2. Or disconnecting it for MAP1. Karthik instructed me to disconnect the lambda sensor (oxygen sensor for all of us redneck Yankees). That way the fueling will be spot on without the lambda sensor leaning it out. And causing the exhaust system from getting as hot as it does normally under OEM conditions. This worked beautifully. Not only did the exhaust run cooler, but the whole engine runs cooler. However the drawback being the check engine light remains on. (Fuuuudge, aka: f#@k!). Well wouldn’t you know Karthik has an answer for that to! In the form of a lambda bypass coupler. These folks at Race Dynamics have thought of everything. So (WHAM) he fires it off to me via DHL shipping. And to top that off he sends me a new (Shhh don’t tell anybody, a secret MAP. I refer to it as MAP3! I know, not very original. So yesterday I installed the lambda bypass coupler and downloaded (👏 the new map. Which I have now named MAP Frankenstein!) Because, IT’S ALIVE, IT’S ALIVE!!!!!

What you must first understand is that the PWTC is not just fueling. It also adjust ignition timing. Adjusting both simultaneously changes everything. And change it, they have done!!!!! Hats off to all the folks at Race Dynamics.

This is what MAP Frankenstein has done for my Himalayan.
#1: instant acceleration off the line. No more mild manner put, put off the line with my throttle wide open.
#2: gets up to speed much faster. What use to take me miles to reach 65mph. Now I can be up to 75mph before the highway on ramp ends. Huge shocker for me, As I rode into to town to make my mid-term vote count.
#3: Speed. Prior to installing the PWTC, I could barely reach 70mph. And to do so. It took miles tucked down behind my windscreen. Now I’ve been to 85mph hitting redline on the tachometer. I’m thinking it’s time to do a sprocket change for better highway cruising.
#4: low end trials style rock crawling. The PWTC has not interrupted the Himalayans tractor factor.she crawls along at idle in some of the trickiest terrain. Just today I found myself having to make a split decision out in the desert. Having to choose ascending a near vertical rock wall. Or falling off an 8 foot ledge. I was able to build up any speed. So I had to tackle it at near standstill. If the Himalayan had been in OEM fuel and ignition timing management. I’m certain she wouldn’t have made the climb. And I would have come out bumped and bruised.
#5: riding with other bikes is much more fun now. Where I had once struggled to keep up with my buds on their bikes. Now the Himalayan seems to hang right with them. Not in overall speed, in quickness.
#6: with the PWTC the Himalayan just seems like an easier bike to ride. The sluggishness is gone. It feels like there is a different engine in her now.

Would I recommend it. Hell yes I would. If your running OEM configuration, your missing out on what this machine has to offer. The India people are adventurers. They know how to build a machine that will take them up the Himalayas. They have machismo. Something most Americans lack these days. But I will tell you this. If you purchased this machine. Your not lacking any Machismo. In fact your wearing right out on your sleeve for all to see. The Himalayan says that all over it.
So get off your asses and email  PowerTRONIC sales@powertronicecu.com

I am in no way affiliated with or benefiting from Race Dynamics/PowerTRONIC. They just make a great product. And have stellar customer service. You just can’t go wrong. Also please forgive my typos and punctuation. I’m no writer. I’m just an average guy very much like the rest of you folks. And please feel free to contact me with any questions. I just want us all to enjoy this unique motorcycle that we purchased 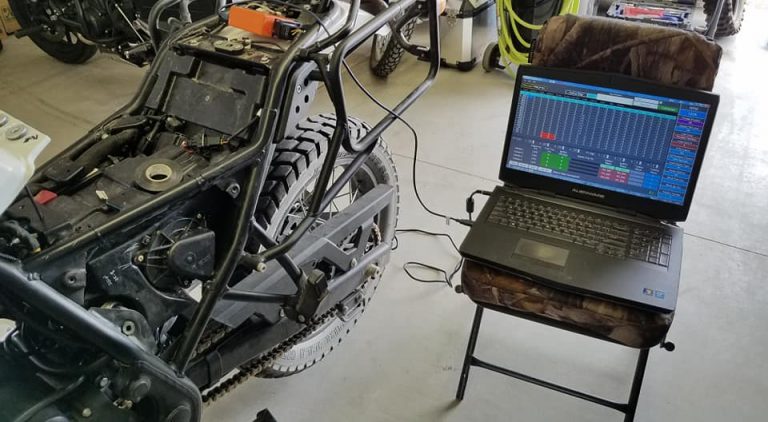