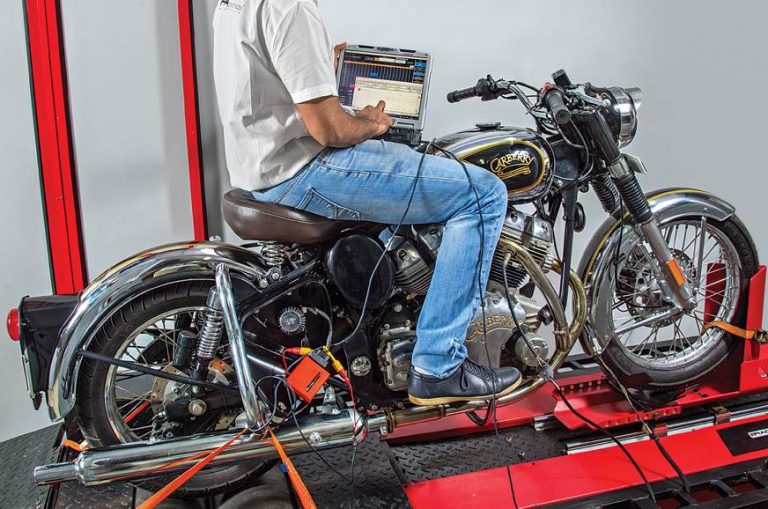 Taking the carb out of Carberry

First, let’s set the scene. It was a rainy summer day in Bengaluru – which felt unusual to me coming from Mumbai. However, where we were headed had something even more unusual in the works – a Royal Enfield plugged into a laptop! Wait, what’s happening here? This wasn’t just another Royal Enfield and nor was it an ordinary laptop. The motorcycle was Carberry’s Double Barrel 1000 prototype and the laptop was set up for dynamometer testing. In view were a lot of wires and the large, red motorcycle dyno itself. So, what were we up to and why was the Double Barrel 1000 again a prototype, you ask?

Paul Carberry always wanted to build what, according to him, was the world’s most beautiful motorcycle. He also wanted to build a British V-twin. But, as the British motorcycle industry withered into non-existence, the only truly British name that still remained was Royal Enfield. That, combined with the fact that they were pre-unit construction, made them easy to put together. Or at least that’s what Paul made it look like – he built 13 motorcycles in Australia, before coming to India and making it a business

Like every other automobile manufacturer in India, Carberry, too, had to meet the latest emission norms. To do so, a conversion to fuel-injection was necessary – not an easy task. The motorcycle was first brought to the Race Dynamics workshop in Bengaluru – before it made its way to Chennai for testing – and this where we met the machine and the men behind its transformation. Not only did we have exclusive access to the development of this new variant, but also to having the complex process of converting a carburetted bike to a fuel-injected one explained to us by Paul Carberry himself

Along with the fuel-injection system, the prototype was also being tested with a new custom exhaust setup, ABS-equipped front and rear disc brakes – all of which we will touch upon shortly. As Paul points out, fuel-injection is more efficient because it has a much better way of atomising fuel. This method sends the correct amount of fuel at the right time, as opposed to the delayed response one would find in a carburettor-fed engine. In a fuel-injected setup, software and sensors read what the engine is doing and feed it more appropriately when compared to carburettor setup.

Paul says he had a head start due to Royal Enfield, as most of the components used by Carberry have been manufactured by Delphi and are set up to run on Enfield’s current 500cc line-up. The Carberry unit is basically two 500cc Royal Enfield motors put together; they have used most of the components twice. For starters, the injectors, throttle bodies and lambda sensors are lifted directly from Royal Enfield models and are on the Carberry in sets of two. The heat sensor, throttle position sensor and the ignition system also come from Royal Enfield, but, unlike the other components, only single units have been used here

Custom work has been put into making the manifolds, air-filter boxes (yes, it has two air filters), wiring harness and the ECU. The manifolds mount the throttle bodies without looking out of place, and, while one of the air filters sits to the left of the forward-set cylinder, the other one sits diagonally opposite in the tool box behind the rear-set cylinder. Both air-filter boxes have custom breather pipes as well. The wiring harness, on the other hand, is also off a Royal Enfield, but has been reconfigured to connect double the components. Like the wiring harness, the ECU is also from Enfield’s parts bin. However, it runs a custom Powertronic piggyback unit, which is being fine-tuned for use on future Carberry offerings as well

As we said before, the bike also gets a new custom exhaust system. Its prototype header pipes have slots to run large oxygen sensors (to help tune the motorcycle), which, after testing, will make way for smaller units. These header pipes meet at a custom chamber that also doubles as the catalytic convertor. Interestingly, Paul mentioned he was trying to use the least amount of cells possible in the catalytic convertor to keep the weight low. Completing this system was the muffler that comes from Euro-IV-compliant, export-spec Royal Enfield models. The mix and match did make for a rather rudimentary-looking exhaust system, but Paul states that the final product would look a lot more appealing, and we don’t doubt that, given his keen eye for visual details

It took Paul only around three weeks to get the components fitted and running on a single cylinder, after which the tuners came in and got both the cylinders firing within five days. This is quick, but we have to keep in mind that Carberry used a lot of components already developed for some Royal Enfield models. This transformation did come with its fair share of challenges and a major one was something as simple-sounding as sourcing parts. Carberry doesn’t have direct access to Royal Enfield’s parts bin and sourcing fuel-injection components like the injectors and sensors was difficult. Secondly, building the custom manifold was a challenge due to the lack of room near the engine. And it didn’t stop there. Once the bike reached the tuner, they had a difficult time getting the trigger timing right, since it was originally set-up to run only one cylinder

So, how does Paul Carberry feel about taking the carb out of the equation? Well, he is old-school and would have preferred to continue using carbs for its look, feel and simplicity over the fuel-injection setup. However, he does feel the fuel-injection system will give his motorcycle a higher power figure, and return better fuel efficiency figures, all the while being more reliable. The new motor will also idle perfectly, be it hot or cold, and will also self-adjust to weather conditions, unlike a carb-equipped motorcycle. But Paul misses the charm and character of the older bike’s uneven idle and he wouldn’t have made the change if he didn’t have to. This is why he says he will continue to offer the crate motor for Rs 4.96 lakh (excluding taxes) with carbs, but it will also be available in fuel-injected form. A big reason for this is that custom bike builders prefer carbs for their rich, old-school character and traditional tuning methods

However, when it comes to the Double Barrel 1000, Paul had to go the fuel-injected way not just to meet regulations, but also to comply with his partners and customers’ demand. It is also why the prototype has ABS-equipped front and rear disc brakes. Paul feels that a motorcycle loses some of its character with ABS and his history of sliding around with dirt bikes backs that up. Still, ABS has been proven to be much safer and is becoming mandatory across the globe. Despite all the additional technology and equipment, Paul confirms that the bike will not cost the consumer any more than the current price of Rs 7.35 lakh (excluding taxes). After witnessing all the work that’s gone into the Double Barrel 1000, we can’t wait to see what it feels like to ride. Let’s just hope it isn’t raining when that day arrives